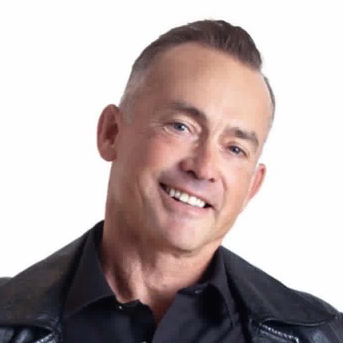 Jeff Amsden began his training in Spokane, Washington with the Spokane Ballet and later joined the company. He also studied on scholarship with the Pacific NorthWest Ballet and then the Joffrey Ballet in New York. Jeff toured the US for three years as a soloist with the Joffrey Ballet concert group. He also danced with the Chamber Ballet USA in New York. In Rome, Italy. Jeff was featured on the variety show Fantastico Five and in the feature film Joan Lui.

Upon returning to New York, Jeff was featured on Guiding Light and partnered Shirley MacLaine on the television special 100th anniversary of the Statue of Liberty. He danced with Debbie Allen and The Pointer Sisters on the Martin Luther King, Jr. TV special. After auditioning with hundreds of dancers, Jeff was hired as a lead dancer on the groundbreaking TV show Dancin’ to the Hits and relocated to LA.

While in LA, Jeff danced on the American Music Awards with Gloria Estefan and was featured on The Academy Awards. Jeff appeared in six national commercials and the feature films; I’ll Do Anything, choreographed by Twyla Tharp, And the Band Played On with Richard Gere, Leonard Part Six with Bill Cosby and Cinderella choreographed by Academy Award winning director Rob Marshall starring Brandi and Whitney Houston.

Jeff had a featured role in the original LA production of The Phantom of the Opera and worked with Jerome Robbins of the workshop for the Tony Award winning show Jerome Robbins Broadway. Jeff also has been featured in roles on The Tracy Ullman Show, Coach, and partnered Paula Abdul in her video Blowing Kisses in the Wind.

Jeff is a Master teacher having taught at LA’s Edge Performing Arts Center and currently teaches at the biggest dance studio in the world, Broadway Dance Center. Jeff has been a guest teacher at London’s Pineapple Studios, The University of Idaho, Cornish Institute of the Arts, Texas Christian University, and Colorado State University. Jeff teaches Jazz, Lyrical, and Ballet. Every Tuesday, Jeff flies to Orlando, Florida where he teaches at American Dance Machine. His students appear on Broadway, in Films/Videos and in concerts with Britney Spears, Janet Jackson, and Christina Aguilera, as well as the Radio City Music Hall Rockettes.